Under the skies of Figueira XVIII

The sky is blue, it is the weekend and your visitors are in the sand of Praia da Claridade and Buarcos. October has arrived and the weather is mild and pleasant. A new wave from Covid-19 lurks on the planet; thus, it is necessary to take certain precautions.

You, Figueira, are very pleasant and the world waits for better days, free from Covid-19, to enjoy your charms in a relaxed way. For now, no crowds, permanent use of masks in closed environments and our thanks to those who care for adapting public spaces and for the immeasurable commitment of the health professionals always present. Joy is not forbidden; hope neither.

I come from Praia de Buarcos and walk along Praia da Claridade beach towards the Marina. I see the Fort of Santa Catarina. Contemplating its wall in the distance, its lighthouse and adding this view to what History tells us about the saga of this people since the prehistory, makes for a delightful walk through time. History offers the effects and its protagonists allowing the visitor to discover the traces in loco.

Francisco Costa¹, in his brilliant master’s dissertation, describes the genesis of the current parish of Figueira da Foz as follows: , (…) and in the region of the Hill (…). In turn, the Mondego River invaded most of the south, tearing three river beaches across the territory: Praia da Fonte to the West, Praia da Reboleira in the middle and Praia da Ribeira to the East. Over the western part, facing the sea, the territory would be mostly flat although with some unevenness ”² 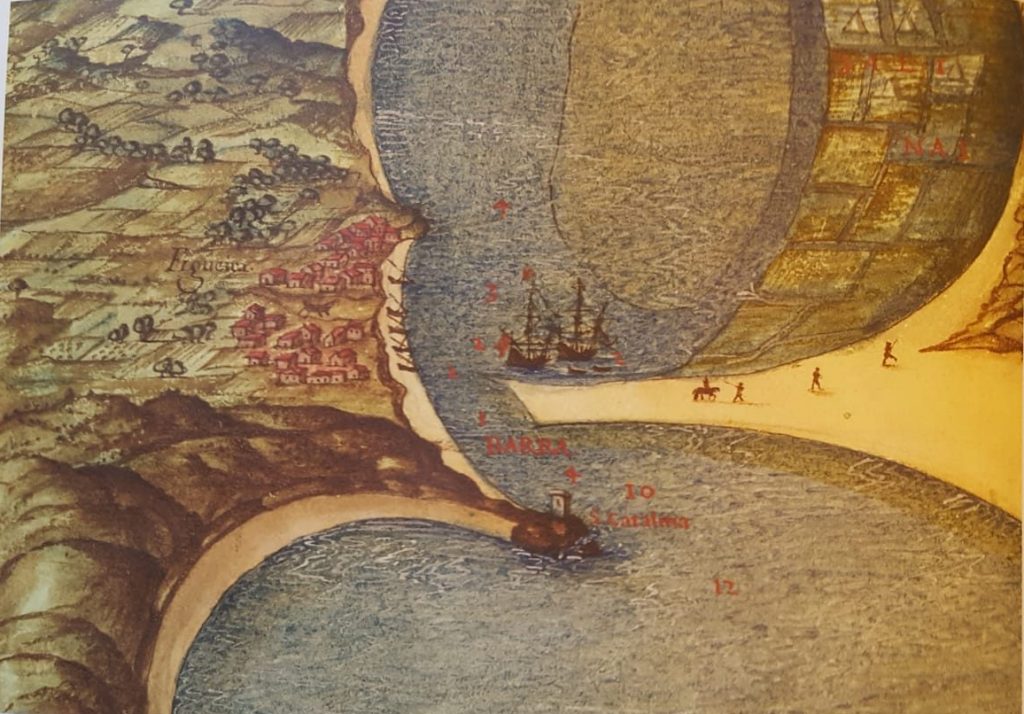 Francisco Costa (citing Irene Pereira) also remembers that Santa Catarina Hill bears this name because it is located in the passage that led to the outfall of the mighty Mondego, where there was already a Chapel named after the same saint, even before the construction of the city fortress walls, according to “a contract established by the Monastery of Santa Cruz, in 1589, with Mateus Rodrigues, for its rebuilding”. He adds that “the chapel also served as an Inquisition court, in 1645, and in 1733, some public deeds were held in it” .³

The life of Saint Catherine of Alexandria 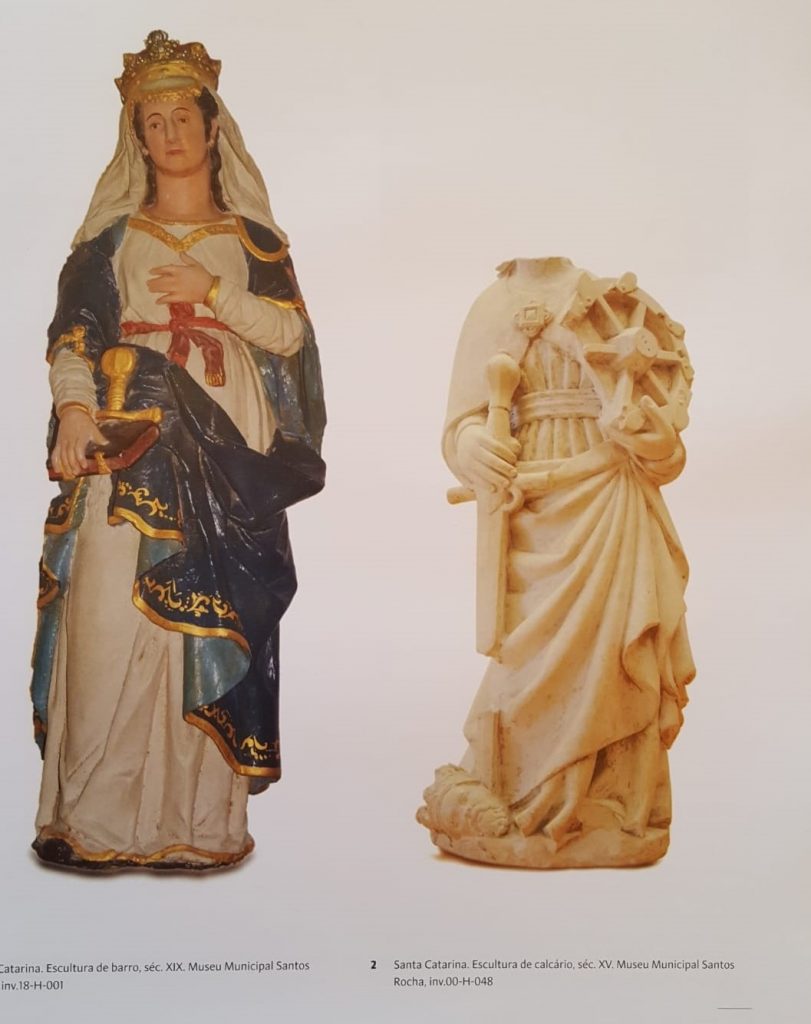 “The life and martyrdom of Catherine of Alexandria are so mixed up with Christian traditions that it is still difficult today to separate the real events from the imaginary ones of her devotees, spread around the world. Very revered, her name has become a common choice in baptism, and in her honor many churches, chapels and localities are dedicated to her, in the East and in the West. ” 5

It is said that the beautiful Catherine of Alexandria, daughter of King Costus, a woman of rare beauty and intellectuality, at the age of 18, refused to abandon Christianity to worship the Egyptian gods and marry Emperor Maximino, who had promised to divorce his wife and make her the Empress.

In the face of Catarina’s refusal, Maximino condemns her to torture by means of a wheel with blades and pointed irons. In the face of the executioner, Catarina would have made the Sign of the Cross and the wheel broke into pieces. Angrily, the Emperor ordered her beheading. Her body was taken by angels to Mount Sinai on November 25th of the year 305.

Centuries later, Justinian built the Monastery and the Church of Santa Catarina on Mount Sinai, and it was only in the 18th century that the tomb of the Saint was located. Countless miracles are attributed to St. Catherine of Alexandria around the world.

Francisco Costa, citing Rui Cascão, says the Fort of Santa Catarina received repairs during King Sebastian’s (1557) and Henry’s (1578) reigns; it is certain that it was only in 1648 that the outer walls were built and, in fact, the firepower of the fortress increased, which reinforces the “local maritime security” .6

Due to Figueira da Foz’s geographical conditions and the Mondego river, “it is believed, and with historical knowledge, that the foundations of this fortification belong to the reign of D. João I (1385-1433). Due to Figueira’s position and for the protection of the Mondego River outfall, some prominent men from the Coimbra’s Chamber  asked King D. Filipe I to build a fort for these purposes, and the proposal was accepted. ”7 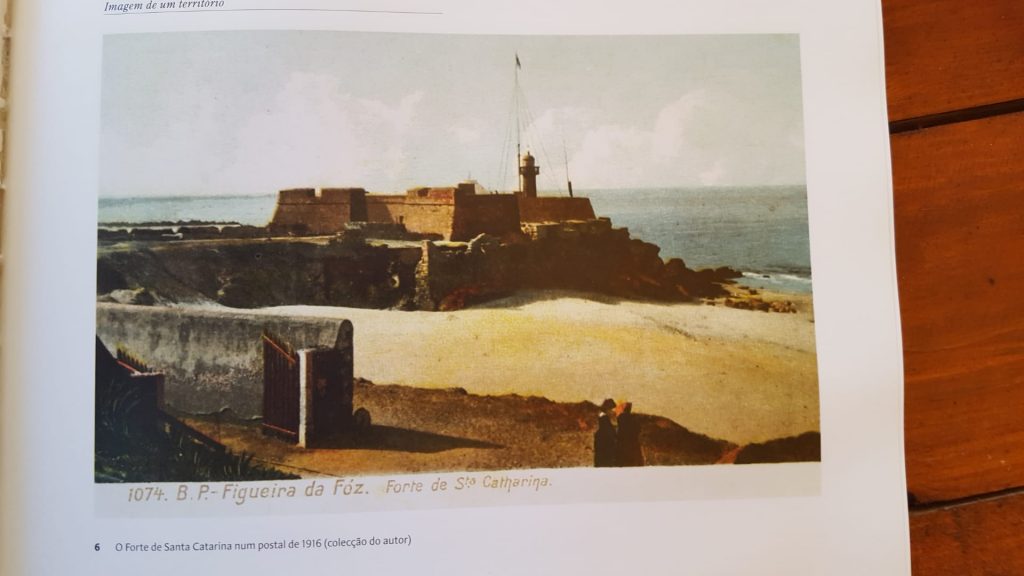 In several researches there is not always precision as to some dates in historical facts, however, the involvement and the historical importance of Santa Catarina Fort in the protection and growth of Figueira da Foz is evident. The presence of the Figueirenses in the attack and looting of the fort by English pirates in 1602; in the construction of the wall in 1643; in the invasion of the fort by the Napoleonic army and its resumption by the Figueirenses.

Remember: despite Covid-19, you, Figueira da Foz visitor, are always very welcome and will be able to sip the wonders that Portuguese History has reserved for us. Coming to Figueira (and even at your home) please follow the recommendations that aim to minimize the spread of the virus.

Column: Under the skies of Figueira
Author: Ana Valentina Ângelo

Under the Skies of Figueira – XIII

Under the skies of Figueira- XII

Under the skies of Figueira – XI

Under the Skies of Figueira – X

Under the Skies of Figueira – IX

Under the skies of Figueira -VIII

Under the skies of Figueira VII

Under the skies of Figueira VI

Under the skies of Figueira – V

Under the skies of Figueira – IV

Under The Skies Of Figueira – III

Under the skies of Figueira – II

Under the skies of Figueira – I

Fill the Form and We will contact you shortly

We use cookies to ensure that we give you the best experience on our website. If you continue to use this site we will assume that you agree with it.Ok